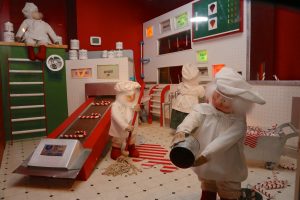 From CityBeat’s 2013 story on the Shillito Elves:

The Shillito’s elves’ journey from the North Pole has been a long one. From the holiday windows of the John Shillito & Co. department store to a home in Mariemont, they’ve captured the imagination of Cincinnatians for decades.

From the mid-1950s to the mid-1980s, the Shillito’s department store served as a home for two different generations of holiday elves. In the beginning, Shillito’s visual merchandising department refurbished other department stores’ holiday displays each year, making the outsider elves and Christmastime tableaus their own. But in 1979, after two decades, the downtown department store breathed new life into its elaborate holiday exhibit with a fresh family of locally handcrafted elves.

But by 1983, the elves disappeared, marking the end of a nearly 30-year Cincinnati holiday tradition. Shillito’s became Lazarus and eventually moved. And the storefront windows on Seventh and Race streets, which still exist, became home to creative displays from businesses like the branding agency Landor instead of mechanized elves.

And as the lights of downtown Cincinnati’s golden age dimmed, so did the elves; they were forgotten and placed in storage for more than a decade until Lazarus moved and sold them to two Boy Scout troop from Dent in the late ’90s. But by this time, due to wear and disrepair, only a little more than half of the elves remained.

Once the elves disappeared from the public eye, their memory was kept alive in family stories and old newspaper clippings archived in Cincinnati libraries.

This holiday season, new generations are again able to see the elves for themselves, thanks to Bill Spinnenweber. Spinnenweber, whose family owns the Mariemont Inn, found the elves by chance during the 2004 holiday season and bought the display in 2005 from the Boy Scout troops.

“I was Googling to find out what happened to them and stumbled onto an old article that said they were in Dent,” he says. “I went to see them, and as I left I half-kiddingly told the owners to let me know if they ever wanted to sell them.”

When the display was put up for auction the next year, only 75 elves and 12 scenes remained. Spinnenweber was quick to purchase what was left of the original Shillito’s display to ensure the local treasure remained in Cincinnati. (There was rumor a buyer from Louisville, Ky., was looking to relocate them.)

Unable to find a space for the elves Downtown, Spinnenweber exhibited a few scenes around the Cincinnati area. Temporary scenes were set up in Mariemont storefronts; there was a display at Newport on the Levee; and two scenes opened to the public at Crossroads Community Church in Oakley. Unable to display all of the elves at once, the majority remained tucked away in storage.

When Spinnenweber set up the scenes at Crossroads in 2006, the frenzied response was overwhelming. Before the display even opened, more than 30,000 reserved times to see the elves.

But they needed a more permanent display; in their elderly state, constant set-up and tear-down left many elves injured.

They still haven’t found a home true to their downtown roots, but Spinnenweber keeps the tradition alive today by putting the elves to work in Santa’s Workshop across from his family’s inn. Finally, the elves are together again.

The Shillito's Elves' Workshop will be open Friday, November 25 through December 30st!

Admission is $4. Children 3 and under are free (one child free with one paying adult)

Located in the Village of Mariemont, across the street from the Mariemont Inn and next to LaRosa's. Free parking.